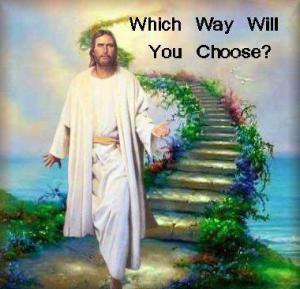 I’ve always loved the parables that Jesus told, and appreciated that each time I read them I receive a different lesson or even a repeated lesson that helps me in my daily walk with Christ. Over the years I’ve even received inspiration to write a parable or two and so I may share some of those here. This one is a parable that came to me around Christmas time as I watched my youngest daughter and my granddaughter open their gifts. I hope you enjoy reading it and that it blesses your soul for the Lord. Here it is…

From Charles Spurgeon’s “Faith’s Checkbook”
No Stranger in Heaven
December 31
Thou shalt guide me with thy counsel, and afterward receive me to glory. (Psalm 73:24)

From day to day and from year to year my faith believes in the wisdom and love of God, and I know that I shall not believe in vain. No good word of His has ever failed, and I am sure that none shall ever fall to the ground.
I put myself into His hand for guidance. I know not the way that I should choose: the Lord shall choose mine inheritance for me. I need counsel and advice; for my duties are intricate, and my condition is involved… The counsel of the infallible God I seek in preference to my own judgment or the advice of friends…
Soon the end will come: a few more years and I must depart out of this world unto the Father. My Lord will be near my bed. He will meet me at heaven’s gate: He will welcome me to the gloryland. I shall not be a stranger in heaven: my own God and Father will receive me to its endless bliss.
Glory be to Him who
Will guide me here,
And receive me hereafter. Amen.

Several times in the Scriptures the Lord hath said this. He has often repeated it to make our assurance doubly sure. Let us never harbor a doubt about it. In itself the promise is specially emphatic. In the Greek it has five negatives, each one definitely shutting out the possibility of the Lord’s ever leaving one of His people so that he can justly feel forsaken of his God. This priceless Scripture does not promise us exemption from trouble, but it does secure us against desertion. We may be called to traverse strange ways, but we shall always have our Lord’s company, assistance, and provision. We need not covet money, for we shall always have our God, and God is better than gold; His favor is better than fortune.
We ought surely to be content with such things as we have, for he who has God has more than all the world besides. What can we have beyond the Infinite? What more can we desire than almighty Goodness.
Come, my heart; if God says He will never leave thee nor forsake thee, be thou much in prayer for grace that thou mayest never leave thy Lord, nor even for a moment forsake His ways.

God Only, You Can Trust (Spurgeon’s Faith’s Checkbook)

From Charles Spurgeon’s “Faith’s Checkbook”
God Only, You Can Trust
December 26
Peter answered and said unto him, Though all men shall be offended because of thee, yet will I never be offended. (Matthew 26:33)

“Why,” cries one, “this is no promise of God.” Just so, but it was a promise of man, and therefore it came to nothing. Peter thought that he was saying what he should assuredly carry out; but a promise which has no better foundation than a human resolve will fall to the ground. No sooner did temptations arise than Peter denied his Master and used oaths to confirm his denial.
What is man’s word? An earthen pot broken with a stroke. What is your own resolve? A blossom, which, with God’s care, may come to fruit, but which, left to itself, will fall to the ground with the first wind that moves the bough.
On man’s word hang only what it will bear.
On thine own resolve depend not at all.
On the promise of thy God hang time and eternity, this world and the next, thine all and the all of all thy beloved ones.
This volume is a checkbook for believers, and this page is meant as a warning as to what bank they draw upon and whose signature they accept. Rely upon Jesus without limit. Trust not thyself nor any horn of woman, beyond due bounds; but trust thou only and wholly in the Lord.

From Charles Spurgeon’s “Faith’s Checkbook”
World Concord
December 15
And they shall beat their swords into plowshares, and their spears into pruning-hooks: nation shall not lift up sword against nation, neither shall they learn war any more. (Isaiah 2:4)

Oh, that these happy times were come! At present the nations are heavily armed and are inventing weapons more and more terrible, as if the chief end of man could only be answered by destroying myriads of his fellows. Yet peace will prevail one day; yes, and so prevail that the instruments of destruction shall be beaten into other shapes and used for better purposes.
How will this come about? By trade? By civilization? By arbitration? We do not believe it. Past experience forbids our trusting to means so feeble. Peace will be established only by the reign of the Prince of Peace. He must teach the people by His Spirit, renew their hearts by His grace, and reign over them by His supreme power, and then will they cease to wound and kill. Man is a monster when once his blood is up, and only the Lord Jesus can turn this lion into a lamb. By changing man’s heart, his bloodthirsty passions are removed. Let every reader of this book of promises offer special prayer today to the Lord and Giver of Peace that He would speedily put an end to war and establish concord over the whole world.

From Charles Spurgeon’s “Faith’s Checkbook”
High Places of Defense
December 5
He shall dwell on high: his place of defense shall be the munitions of rocks: bread shall be given him; his waters shall be sure. (Isaiah 33:16)

The man to whom God has given grace to be of blameless life dwells in perfect security.
He dwells on high, above the world, out of gunshot of the enemy, and near to heaven. He has high aims and motives, and he finds high comforts and company. He rejoices in the mountains of eternal love, wherein he has his abode.
He is defended by munitions of stupendous rock. The firmest things in the universe are the promises and purposes of the unchanging God, and these are the safeguard of the obedient believer.
He is provided for by this great promise: “Bread shall be given him.” As the enemy cannot climb the fort, nor break down the rampart, so the fortress cannot be captured by siege and famine. The Lord, who rained manna in the wilderness, will keep His people in good store even when they are surrounded by those who would starve them.
But what if water should fail? That cannot be. “His waters shall be sure.” There is a never-failing well within the impregnable fortress. The Lord sees that nothing is wanting. None can touch the citizen of the true Zion. However fierce the enemy, the Lord will preserve His chosen.

From Charles Spurgeon’s “Faith’s Checkbook”
Acquiring Perseverance
November 23
The Lord thy God will put out those nations before thee by little and little. (Deuteronomy 7:22)

We are not to expect to win victories for the Lord Jesus by a single blow. Evil principles and practices die hard. In some places it takes years of labor to drive out even one of the many vices which defile the inhabitants. We must carry on the war with all our might, even when favored with little manifest success.
Our business in this world is to conquer it for Jesus. We are not to make compromises but to exterminate evils. We are not to seek popularity but to wage unceasing war with iniquity. Infidelity, popery, drink, impurity, oppression, worldliness, error; these are all to be “put out.”
The Lord our God can alone accomplish this. He works by His faithful servants, and blessed be His name. He promises that He will so work. “Jehovah thy God will put out those nations before thee.” This He will do by degrees that we may learn perseverance, may increase in faith, may earnestly watch, and may avoid carnal security. Let us thank God for a little success and pray for more. Let us never sheathe the sword till the whole land is won for Jesus.
Courage, my heart! Go on little by little, for many littles will make a great whole.